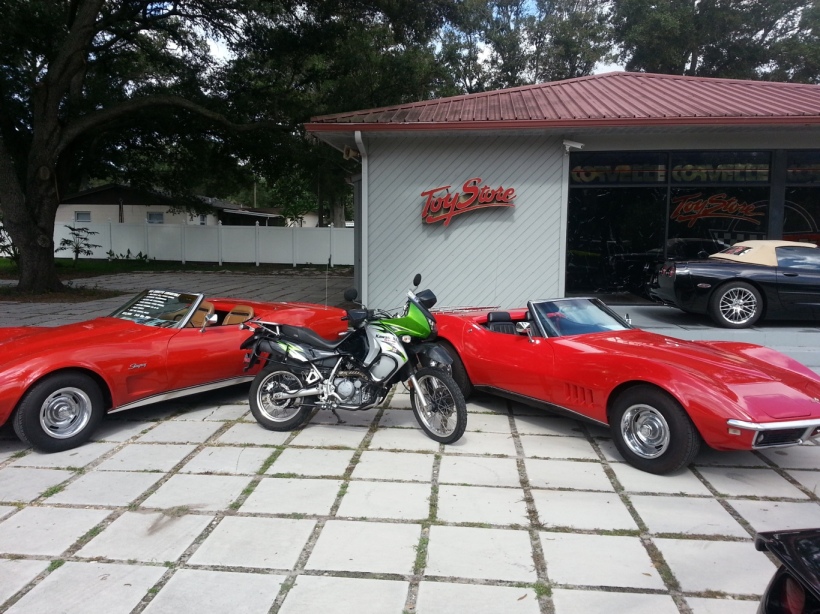 Kimmie Lou (slipped out of her skid plate) “Basically, I’m into guys, but if I ever went automotive,….Veronica and Victoria Vette right here in Largo.”

Weeks of cooler creekside camping are the plan……just as soon as we make it to Tennessee. We have stayed over a couple of extra days in the St Pete’s area for several reasons. Kimmie Lou wasn’t herself – idling rough – stalling ……typical gulf shores alcohol poisoning, stay out of the sun, stay better hydrated and only short fun rides for the next few days was the prescription from the guys at St Pete Powersports. “Take her down to the pier for some nice salt air” suggested Sailor/Biker Jeff , but don’t let her belly up to Johnny Reno’s bar” cautioned Matt, “yeah – keep her air filter dried out for awhile” pleaded Dave & Troy.

“It kinda freaks me out how nice people are here” says Ridicu as we are riding east towards Tampa Bay. “Get used to it, we’ll be hanging out with all kinds of Authentic Southern Hospitable types for around a month or so” I say. “Far out” we are getting close to downtown and we start curving around mirror lake, we both see opportunity after opportunity to straighten off to a regular street but we just keep going round and round. “You know, this little lake isn’t the waterfront.” “yeah” I say, “I’m going to veer off up here and keep going east…..and you know what else?” “What?” “There is italic wording when you speak and I have regular type so at this point we can drop” – Ridicu says or I reply. “So less typing?” “Definately!” “Awesome!” “Wow, check this cool place out for ice cream.” “WE RIDE TO THE PIER, IF THERE IS ICE CREAM THERE, YOU MORONS CAN HAVE SOME” shouts Kimmie Lou, so we keep going “first fresh salt air for our girl.” Kimmie Lou’s a little greener with all the laps around the Lake and the hangover probably doesn’t help, “right, to the Pier then.”

We wander around the Pier, a few bikes start parking around the promenade, a band is setting up in front of Johnny Reno’s. We decide this looks good, “let’s get Kimmie Lou parked over with these sport rockettes.” The walk back along the North side of the Pier’s causeway turns into a run when we realize Sheila is all by herself ! When she sees the look on our faces she laughs and says “it’s okay, Kimmie Lou’s ova thewre chattin up Mawgawita. Somehow Kimmie Lou has got across the curbed causeway and does seem engaged with a very large Margarita.

“I just love your color! – a little more salt on your rim and I would just drink you right down!” Margarita laughs that Exotic German Insect laugh, “ah Frauline you are so delightfully green…….so Kawasaki Green !”

Kimmie Lou has always had a thing for ragtops and we chat for a little while, Margarita hangs out in Tennessee sometimes. “You must do ze Tail of ze Dragon,” Margarita burbles – “it’s exhilarating!” After wrapping things up with Margarita and Sheila we are out to the water’s edge. Kimmie Lou settles in with some sport bikes who are a little snotty at first then liven up when she starts to talk Tail of the Dragon. 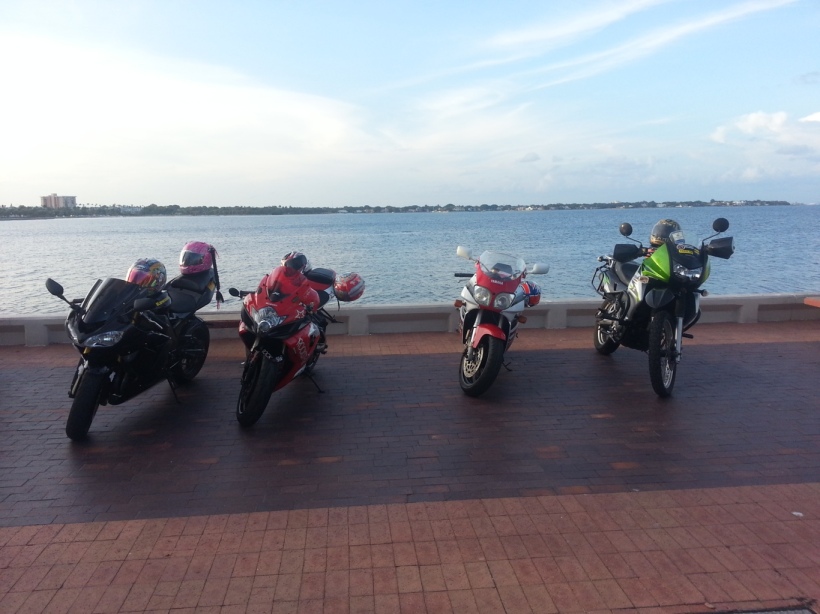 “We did put Kimmie Lou’s disc lock on back there right?” The Corona is cold, the Grouper is blackened but something just isn’t right. “Yeah, I’m thinking that Sheila Scooter was pretty shifty.” Another swallow of grouper sandwich, “and…eh..what about the Pelicans?” “They’re watching us.” We casually look around the restaurant, nobody is looking at us so we probably have not been moving our lips but from where we are sitting at the bar we can make eye contact with at least 5 Pelicans sitting around the edge of the pier. “Is Kimmie Lou in on it?” my gut wrenches at the thought. “Nah, she’s got a little extra freak on right now, but nothing shady.” We pay the check and decide to get back to the ranch.

Riding back out of Downtown St Petersberg, Kimmie Lou says “hey let’s get a picture at the lake, it’s where it all began.” “What began?” we both say. “The slip” she says, didn’t you feel it?” Now that she mentions it we can sense that something did change on our circles and more circles of this calm Mirror lake.
”

Erie place – feels like some energy exists,” Yeah, there’s this thrum.” We look around to see if some transformer is buzzing nearby, nothing seems amiss. “Let’s just watch things for a day or two and we’ll decide on Saturday – agreed?” Everyone agrees, “let’s put a few hundred miles between us and this place.”

“Kimmie Lou, what about the disc lock?” “The Pelican….the really grey older one flew off with it.” “Is it starting again….like the other times?” Kimmie Lou chuckles that won’t start without the choke chuckle, “BTSOM.” Our eyes cross briefly – Ridicu and I glance at each other, another chuckle…..” Beats The Split Outta Me.”

2 thoughts on “The Pier”