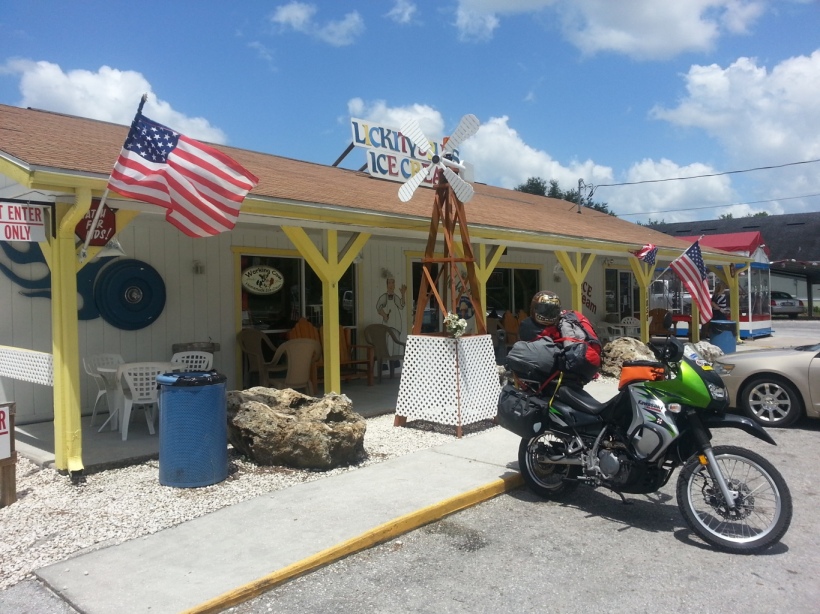 The Fandango Tank Bag seen here in Florida Orange greatly increases your side visibility and with a little extra foam in the bottom, is a great pad for our iPad.

Here at RidicuRyder we feel duty bound to provide actual useful information once in a while. Our travels so far have been scant but the ice cream stop picture above was during a 400 mile plus day,(St Pete Fl – Locust Grove Ga) which to our way of thinking makes us pretty bad (calloused) ass.

First we should mention the ice cream – Lickity Split is a World Famous Ice Cream Parlor located just east of I 75 in Bushnell, Florida (Ridicu thought it would be a good place to see about fitting telescopic sights to our slingshot). When we ordered our Banana Pudding Sundae the Counter Countess asked, “regular topping or psychic topping.” Without missing a beat “we’ll have the psychic with extra whip.” “Modifications to psychic toppings are not available” said the Countess. “What exactly is a psychic topping?” A look over her glasses at us pretty much said it all, but she added “payment first, otherwise DQ something different.” We laid down a twenty thinking this special order had to be a lot more than the $4.50 listed on the board. She handed us $15.50 back and yelled “PSYCHIC TOPPER.”

Another Countess and (one would assume) the Count stopped what they were doing and peered over the counter at us “okay dance” said the Count………”we need something to go on” added the second Countess. Ridicu didn’t hesitate, before I knew it we were busting out almost every move we had. We had barely stopped when all three cried out together “Black Raspberry.” A few minutes later we were having what can only be described as a Frozen Transcendental Experience (David Lynch and his buddies at TM can’t touch this).

“Your bike out there – Kimmie Lou,” said the Count, “would she like a squirt or two of fudge on her chain?” We were amazed at this guy’s psychic gift, nobody had ever said her name before besides us, “nah….sugar gets her all jazzy, but thanks……..you know where the Bushnell folks are at ?” “Your in the wrong Bushnell, besides, don’t cha think rifle scopes on a slingshot are kinda stupid ?” These folks hadn’t steered us wrong so far, Ridicu responded (most uncharacteristically) “I completely agree…..I don’t know what I was thinking.”

Next, this nifty little tank bag, the coolest bike accessory we have owned so far really fits Kimmie Lou’s tank without interfering with steering and it’s just bulky enough to rest an elbow on when cruising. Below, it’s custom (trauma sheared fitness mat) foam insert keeps the iPad cushy and the provided divider fits over the back end of the iPad, over this rests our mesh bag with electronics entanglement theory including a small inverter for charging stuff underway.

Poor light conditions make this shot ultra-realistic…..notice how you can barely make out the iPad and electronic entanglement theory mesh bag underneath Mr. Fandango (slushy in background 50/50 Banana & Raspberry).

The “Trucker’s Tarp” material used to make this bag bounce 22 slugs right off it (Long Rifle 22’s will leave a scuff). Now in all honesty we did choose the Orange for Kimmie Lou – basically she insisted, “I’M TIRED OF YOU MORON’S RIDING OFF WITH MY DISC LOCK ON – GET THE ORANGE BAG AND MAYBE THE ASSOCIATION WILL TRIGGER A BRAIN CELL OR TWO !” 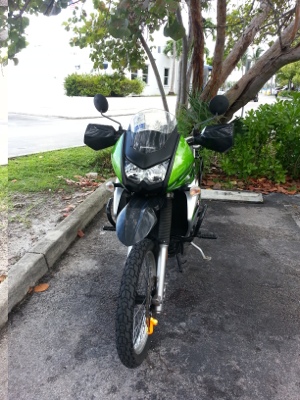 A while back in Marathon we pseudo John Wayne – walked out to Kimmie Lou parked right in front of the 7 Mile Grill – almost at capacity….the breakfast patrons got a little extra pork. We did our (fairly chronic) mis-step where the disc lock stays on and we ride away (I am almost positive Ridicu never forgets, he just thinks it’s hilarious when I do). Down go the front forks and because I’m already leaning forward to take the elevated apron up to the highway, my sunglasses break as I head butt the windshield. Ever so calmly I stuff the (now 2 piece) sunglasses into my pocket while I am disconnecting the Disc Lock, “Numb Nuts” mutters Kimmie Lou who is just as embarrassed as we are (when she refers to our nuts, it’s in the crazy section – c’mon this is a family oriented blog !).

Without looking back (even sideways) at the restaurant patio – not even once,…..we hear applause as we pull out, this time with a stunning leap into the Overseas highway traffic, “they woulda felt bad if we got smucked by that van eh?” “that’s what I had in mind” Kimmie Lou’s throttle twists through a couple of gear changes – just barely satisfying the underwriters of our life insurance policy. Later Kimmie Lou jumped at Option Orange and started singing that old Sesame Street jingle :

“One of these things looks just like the other”
“Do you Goofballs know what it is ?”

“Get the Orange Fandango, sing every time you walk up to me or I’m not starting. She still makes us sing, even after that St Pete’s Psycho Pier Pelican stole the disc lock !

Now we have to say something about the extra special attention Touratech’s customers get when ordering a Fandango Tank Bag from them (our fair and balanced perspective will of course require us to malign Touratech some as well). The folks at Great Loop Moto provide seam sealant with their bags and I am confident that it is a fine product. However, those purchasing a Fandango bag through Touratech have a choice: “GLMSS” (Great Loop Moto Seam Sealant) OR Touratech’s own GS4 (Galapagos Snail Snot Stitch Sealer)……these Touratech guys dispatch a few riders down to the Galapagos every few weeks to harvest Snail Snot, NATURALLY, No Exotic Galapagos Snails are harmed in this ecologically sound enterprise. The Snails are enchanted into sneezing into tiny cups by the Touratech riders performing a rigorous dance (Touratech training is highly specialized for this and everyone signs a non-disclosure agreement….don’t even ask). Export paperwork out of the Galapagos isn’t the cakewalk it used to be, so the tube you get with your Fandango from Touratech will in fact be the GLMSS tube – however, it’s contents will be superior (wink wink) if you specify GS4 – mention RidicuRyder and they throw a little extra in the tube !

The kid pointing at the snail snot outside the Ingle’s in Clayton Ga was wearing an Orange Tee Shirt…..sadly kid participation for goofy exploits is on the decline, his Mom and I teased him pretty good for not wanting to be in the shot (maybe pointing at Snail Snot creeped him out).

Wikipedia discusses the Fandango “Spanish Dance” in detail……if you scroll down to the Figurative definition you see “Brilliant Exploit.” Check a few other references and you will find “a foolish act or thing” and our favorite “informal nonsense; tomfoolery.” Here is where RidicuRyder finds the commercial practices of both Touratech and Giant Loop Moto somewhat despicable. In our expert opinion any bag calling itself a Fandango has to be Vibrant, Alive, Halfway Playful, Halfway ________ ! Yeah ! We slapped down blank – think everything (minus crappy stuff). Orange doesn’t match Kimmie Lou, the first time we set it up she said “now don’t start calling me Kate Ted Moss!” She wears it…..not to keep us in check where her front disc is concerned and not even to increase our visibility to motorists (we could ride around on fire and still get run down by every second driver texting right in the middle of their facial/Swedish massage/pedicure/fore – headed prostate exam). The main reason…..basically the only reason to go Fandango is how delightfully unrestrained by reason it promises to be.

THE (ORANGE) BAG ROCKS, when current production runs are over we here at RidicuRyder implore you to discontinue any further mundane color schemes (if you really must continue doing black, brown, forest green or whatever, at least consider charging $20 extra per bag and set up a few scholarships to Clown Colleges around the globe). Orange (disc lock/no disc lock – we love it), Granny Smith Green, Hot Pink (we might stipulate as mandatory for BMW riders depending on compliance with our demands), Lemon Yellow…..you get the idea.