“Hey Morons, pack up da gear. I just heard a few locals on a morning walk say there’s been an outbreak of snow blindness around the lake. Now do you believe me when I say your creamy white ass magnifies moonlight ?”

Kimmie Lou seems back to her usual sporty self this morning, she’s giving us the gears about Tent Docking and searing a few neighbor’s eyeballs by doing a little skinny dipping late last night. Motorcycle Adventure Touring might be getting a bad name around these parts….any riders in North Georgia may want to give Burton Lake a pass for a stretch. “Geez, do these folks really think staring at us is gonna make our packing up go any quicker?”

We are on the edge of the Blue Ridge – finally! A little elevation makes all the difference when it comes to cooler nights and tenting during the summer in the South. We are also loving the back roads riding. The interstate was the quickest way to escape Florida’s blast furnace heat…the only “Adventure” in our riding, not previously described in our posts, has been Sodapalooza at Racetrack.

The roads North from here really spark things up – we’re on Vacation! Everyone is happy, maybe even jaunty, except “we have got to get rid of some of this crap we are lugging around.” “Yeah says Kimmie Lou, I told you guys to pack less gear, get rid of some of this stuff or go on a diet!” at the next stop we pull out the notebook and enter – flat rate box to Miami. Now I don’t know if it’s elation from the feeling of the trip getting started or a little left over gravy from Gainesville, but Ridicu gets carried away again. We have stopped at a Tavern outside Clayton that is advertising Ribs! We belly up to the Bar and over comes this Bartender who is around 6’5″ and easily weighs in at 275lbs. Now the thing about Ridicu is, he has to challenge big dudes (the criteria seems to be over 6’4″ and 250lbs.)…..it’s like a tic. “C’mon, think of it as a character building exercise!”

The Bartender says “hey there, what can I get cha.” “How about a Pint glass with half grapefruit juice and half tonic…and uh, would you have a wife or maybe a little sister that could pose for a few shots with our bike….in purple hot pants if she’s got em.” The guy smiles, shoves the pint glass into the ice well and grabs one of those mini cans of grapefruit juice out of the fridge. Before he pops the top he bellows “DARLA!” Over walks the bouncer who is every inch a woman and there are yards of em, she looks (down) at the Bartender and he just nods at us. “This fella’s a photographer and he wants you to do some modeling for him.”

“Those were the best ribs we’ve ever had!” Zipping Mr Fandango back onto the tank ” Darla and Hank were sure nice huh ?” “Yeah, but weird that she only does nudes…how stuck are you on this whole PG13 rating for the blog ?” “NO PORNOGRAPHY MORONS ! …Kimmie Lou is respectable girl.” I smile “looks like we are pretty stuck with PG13.” A ways down the road “OK, PG13, but let’s at least suspend reason a bit more – c’mon we’re on vacation !”

Outside Clayton, we set up camp by WarWoman Creek (it may be named something else, but you take WarWoman Road then a right on Earls Ford just past the firehouse to get here). Free Camping ! Boon Docking ! (maybe a little less exciting after Tent Docking). No pit toilets, no water – completely off grid….we take our camel back to a neighbor’s house for water. She’s really nice – tells us how she was bit by a Copperhead snake twice this past spring. “Really, what did it feel like…we’re you close to death ?” The thing about Ridicu is he thinks death is cool “all right – another dimension – woo hoo !” I listen carefully to all her advice about snake avoidance while suppressing Ridicu’s idiot questions (for some reason, I can do this around really nice people, HW and at work). 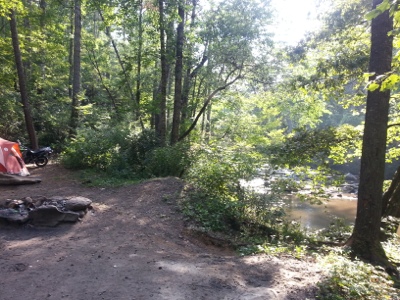 Pretty spot – too bad folks not packing it out as much as they could. Also watch out for horse poop along the road !

When buying a used KLR consider the 2008, especially if it has not had the Doohickey ! Eagle Mike – Coolest Sticker Ever !

We met these riders at Ingles from Pursuit Horizon, they were really cool. Zach and Amanda….get this – she’s on a Honda CBR 600 RR (stands for RidicuRyder we told her) and they are gonna do some of the Trans America Trail on their way back out West – with custom tires (Dunlop is a sponsor). Crotch Rocket on the TAT – Pretty Rider ! Good thing they were so nice (and I could muzzle Ridicu). Zach asked about Kimmie Lou’s “Umbrella Corp” stickers – “dunno, there when we bought her” we’ve never heard of Resident Evil (Old Farts). These guys start scaring the crap out of us “Yeah there’s this whole Apocalyptic Scenario” says Zach. The Apocalypse ! What, what now ?” I quickly change the subject….the last thing we need right now is Ridicu getting all amped up – I didn’t see a Glutton Corral in town.