Kimmie Lou “Entering North Carolina feels a little premature, but c’mon, this trip has to mean more than Peach Pleasure!”

Someone mentioned how beautiful Lake Chatuge was, so we decided to check it out. As it happens Chatuge is BiStateLake (which is probably why we felt so at home there). Our intention was to camp another few nights in Georgia, but a roadside produce vendor insisted we camp just South of Haysville NC at the Clay County Recreation area (maybe it was the way Ridicu went on and on about how we hadn’t found the perfect peach yet). After eating 17 7/8 of her peaches,(dropped a chunk in the gravel) it became urgent that we press on. A campground with good cell signal, water, showers and flush toilets sounded ideal.

Now, the thing you have to understand about Ridicu is that he can be a little paranoid (dietary fiber seems to play a role). We had settled in nicely to one of 10 tent sites (on our own penninsula away from the RV crowd) when he started getting sort of twitchy. “Someone’s watching us….can you feel it ?” I could feel something was about to happen, but I was not prepared for how explosive it would be. 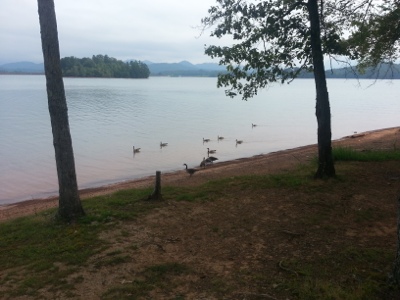 Here in the U.S.A. the need to spy is satisfied by the CIA, NSA etc. In Britain you’ve got MI5 or MI6, Israeli’s opt for the Mossad but in Canada we have Geese.

By the second night I had almost convinced the three of us that nothing was amiss, things were going well – we would make our way North in the morning. At dawn came a revelation that almost made us crap our pants (by now several readers are disgusted with what may seem like a streak of _____ references). There, hanging from her front disc….the lock – L’orange! Ridicu and I went so weak in the knees we wound up down on all fours staring at L’orange, unfortunately, we couldn’t get anything out of L’orange (born blind, deaf and mute with ambiguous genetalia). “Alright Kimmie Lou start talking !” Ridicu’s tone was sharp….accusatory. Kimmie Lou took a beat and then calmly replied, “a skunk came by in the night with it.”

Normally when Ridicu and I glance one another it is just a brief crossing of our eyes, here we held each other’s gaze for a few seconds too long and passed out (something about our psyche not being able to handle direct inspection). The usual temporary paralysis, photosensitivity, weird taste in our mouth and echoes lasted for a couple of minutes as we came around. Smacking and licking our lips we taste something between wet lawn clippings and dog ____.

Kimmie Lou can see we have almost come around “yeah, this sweet little albino skunk ambles up and kicks me right in the kickstand.” “Then when I’m awake she holds up L’orange and says,” ” this your kid ?” “So what did you say?” “What could I say?” “Anything less than full disclosure wasn’t going to cut it – so I said ADOPTED .” “Then what did she say ” (Kimmie Lou likes to make us work for it when she tells a story). “Well, she slapped me….really hard and then slaps L’orange right back on my disc here.” “So far nothing sounds sweet about this Skunk.” Kimmie Lou snorts, “she wasn’t sweet – nice, she was sweet smelling….just like peaches.” ” Did she say anything else?” “Yeah, she said: tell the Morons to stop goofing around.”

Ridicu and I still have this taste in our mouth so it takes a few seconds to fully register, then both of us together “Peaches! Did she say where she was from?” Kimmie Lou shakes her handlebars, ” but she told me her name – Harriet Young.” We know that name sounds familiar ” Harriet Young?” “Yeah, but she said I could call her Harry.” We’re back in the tent a few seconds later unzipping Mr Fandango’s map pocket, we unfold the map and there – just across the line in Georgia is Young Harris! We discuss the situation for a while and decide on a run into Georgia. Kimmie Lou says, “look there is plenty of daylight….how about we discuss things for awhile, you know – strategize.”

Our trip, so far, has been fairly straightforward….but things just got pretty weird. “Maybe you both should tell me a little bit about your lives way back to the future, in that cosmos around the corner.” “OK, where would you like us to start?” “How did you earn a living in the future?” We did a few things, I can remember some act. “We we’re comedians before dropping out” That’s right I remember now “Actually we were pretty successful.” “We were HUGE….when we would do a stadium gig, – SHE – would open for us.” Then, with sudden awareness I add, ” yeah, but only when – SHE – was in town.”

3 thoughts on “Challenge at Chatuge”