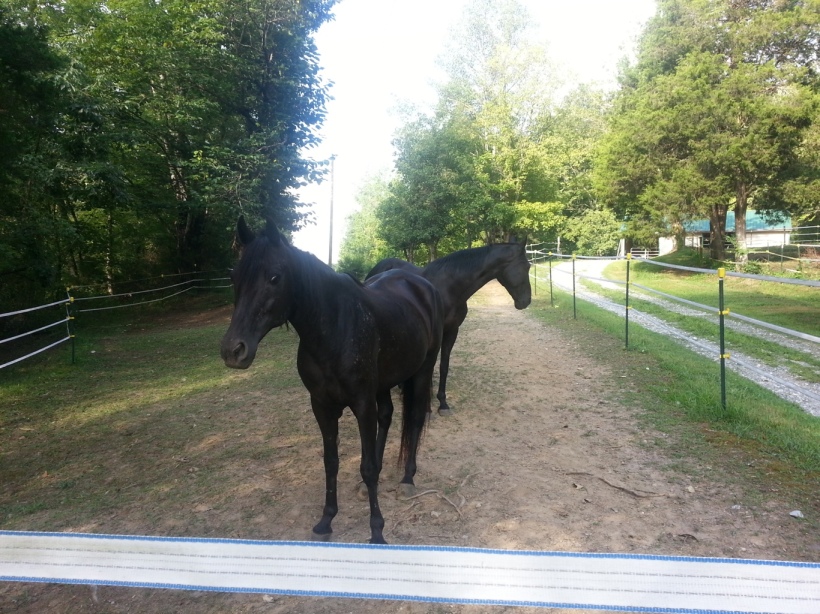 The Black Horse understands death with a grim sort of “so what” ….ideal for the predicament we found ourselves in.

Anything involving hooves dancing across your grave, is generally….best avoided, but sometimes it can be therapeutic. Ridicu had a very odd energy and was unusually helpful for our Northern advance into the Lair of the Dragon. I couldn’t decide if he was relieved to emerge from last night’s close call or gleefully speeding towards a fresh bouquet of doom.

After Hayesville NC you must travel East or West to remain on pavement, we wound our way North, into the Nantahala National Forestry Roads. Kimmie Lou’s rear tire is almost as bald as we are and she fishtails along the winding gravel roads, especially as we begin to climb. Along certain ridges we note the sun on our left as it arcs into the West, each summit we skirt smells slightly more sinister than its southern sisters.

Houses spot a few valleys, up ahead one is below the road to the left, the sun is glistening off the tin roof. We slow, a level patch of gravel allows us to stop and get our bearings….ahead the road narrows; not likely a branch we will take. Our navigation so far has been “eff it – we gotta come out somewhere.” We have only gone 53 miles since our last gas fill and generally we ask for directions when: 1. It starts getting dark 2. Fuel gets thin OR 3. It becomes necessary to engage another human being because we are really starting to get on each other’s nerves (the directions we get are basically just an added bonus).

The road to the right rises sharply, impossible for the way Kimmie Lou is loaded, attempting it appeals to Ridicu’s flair for suicide…..we contemplate going straight but it appears the track will dead end in a few hundred feet. Our ass isn’t all that numb, but there is something about this spot, it might be nice to say hello. We are just about to drop the kickstand when the hounds round the lower end of the farmhouse. The bounding / galloping beasts do not appear friendly, the bark of a hound is really more of a bellow and when you look them in the eye…. hound dogs convey a horrible patience that says “your heart will explode before we even consider the chase has begun.”

Kimmie Lou whoops, as her ass end swoops side to side. We spray gravel into the long miserable faces of these rat bastards who often take sick pleasures, such as freeing convicts of their freedom illusions. Our chest is crushing Mr Fandango as we climb skyward, up was the only option and when we slip into a rain rut we stabilize long enough to gain some speed and shift into second….just in time as this bitch of a grade gets even steeper. Kimmie Lou’s 6,000 RPM Howl is a happy cover for our Creepy Cackling inside the Tasmanian, we laugh like Madmen (more than usual) until the road eases over to switch back around a face stretching across the prettiest Blue Ridge we have seen so far.

Staying high along this mountain for miles we eventually begin traversing its Eastern face. Here we can see its shadow along Lake Nantahala to the East and realize this mountain is actually quintuplets – conjoined at birth. Rounding the Northernmost (runt of the litter) we begin climbing again. Near the crest a Tall Skinny Witch House sits in a hollow, the road dips to half circle the property and we slow down to take a look. The house is mostly purple but many other colors are represented, green and gray trim, windows painted yellow and blue, pink shutters. On a black porch swing sits another one of these Stunning Southern Women except she isn’t even trying. After a quick scan for dogs, we slow and turn into her gate where it says on the tiniest sign, WANDA WITCH.

“Howdy boys….any thoughts on where a friendly witch can tuck into a little doubles action a ways back on the road out there?” “Howdy miss, which witching might you be doubling into…..tennis or hound dogs?” Everyone was quiet for a few seconds, the wind even took a breath. When something doesn’t need saying… nothing gets said, we walked up to the porch for a closer look at this chick. She looked almost exactly like Christina Ricci except her eyes were more thyroidal and her chest was practically flat, at first it looked like she was wearing glasses but then we saw a frame had just been tattooed onto her face. “There’s a wheelchair ramp by the kitchen door, bring Kimmie Lou up on the porch with me.”

Our evening with Wanda got weirder…..

Just after sunrise we clawed our way out of the earth behind the toolshed. There really isn’t a lot of difference between being buried for 5 minutes or 5 hours, but we are pretty sure we had been in the ground for about 5 hours. Aside from waking up buried alive the thing you remember most, is you don’t have to pee…..the soil has just leeched the urine right out of your bladder. Also, as you dust off in someone’s front yard they really shouldn’t complain about your lack of hygienic manners…..we considered it perfectly acceptable to aggressively nose pick and blow snot all over Wanda’s Petunia’s.

“That sounds disgusting” said Kimmie Lou, she couldn’t see because she was covered in some sort of paste. “Tapioca herb headlight facial” explained Wanda, then “shall I hose you boys off?” We thought about it for a few seconds and recognized that tone “would you boys like to see the toolshed?” from last night. “No thanks, just point us to the hose and we’ll do it ourselves.” Ridicu and I refute all breakfasts that present without pork. We almost had to change religion after Wanda turned us onto Cinnamon Goat’s Milk Captain Crunch. As we went for a second bowl we glanced Kimmie Lou’s trip odometer – 12 7/8.

Kimmie Lou politely waited for us to finish our third cup of coffee before saying, “Wanda says there is no such thing as a Well Balanced Megalomaniac.” Ridicu’s heart really wasn’t in it, but “everything hinges on the Workerbeesiacs…..who also, really – aren’t Megalomaniacs, except when they coordinate well at the middleweight level.” Kimmie Lou’s headlight and windshield lexan had been glowing, but now got kinda dark “BULLSHIT!” Wanda leaned in and patted Kimmie Lou’s seat ” alternate worlds have alternate frameworks Kimmie Lou, I just said that these Morons regularly mix up frames.” Then Wanda pushed her tattoo glasses up on her nose….then the glasses disappeared.

We all sat around discussing various frameworks in differing worlds for a while, eventually Kimmie Lou settled down a bit. “Look Kimmie Lou, you are a machine…..Ridicu and I just have to be careful discussing this kind of stuff with you – it is better to have broader, more vague information for Machines.” Kimmie Lou looked at Wanda, who said, “technically, the Morons are right here – Machines generally desire an ordered and safe world….sometimes the worse thing you can do is discuss simple frameworks with Machines because they’ll take off with them and before you know it you’ll be running the world.”

We talked for a while longer, then Kimmie Lou asked “so how do the Workerbeesiacs balance everything out?” We looked at Wanda “you started this.” Wanda rubbed her eyes and the frames reappeared on her face, ” machines can’t run the world….whenever they try, everything goes wrong.” We all put a hand on Kimmie Lou to soften things a little for her – this was hard for her to hear. Wanda continued, ” Workerbeesiacs are basically people who KNOW how to do things, sort of like Machines, but they also know about the limits of mechanized operations.” “When they forget these limits, they can mindlessly drone on with usual Megalomaniac Imbalances and the world will just run itself off a cliff.” “And so far, it has every time” added Wanda.

2 thoughts on “Notions of Death”