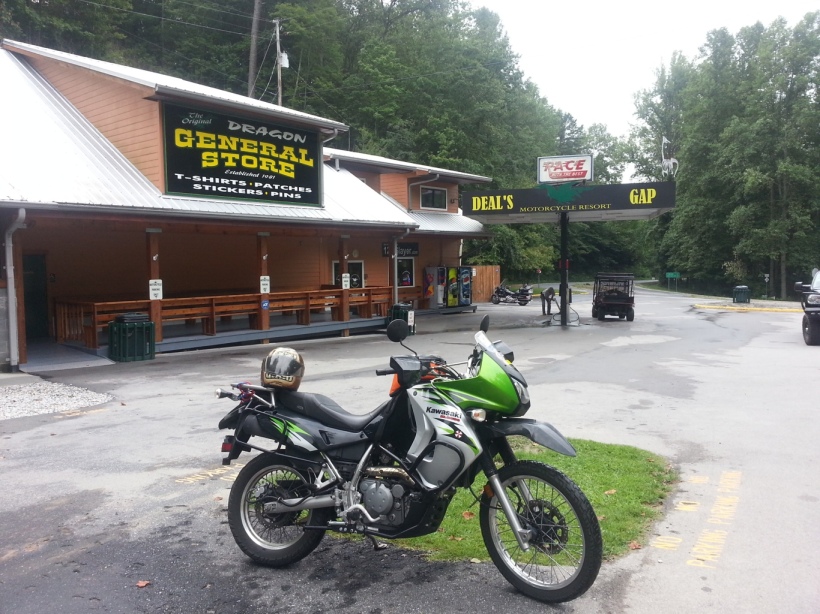 Back at Deals Gap after running the Dragon twice. Kimmie Lou, “hey get me one of those teensy Dragon stickers for my windshield.”

We had not even walked through the door to Pop and Nana’s when there it was, waiting for us at our favorite table…..the Angle Banana Split! She walked over to us as we sat down and picked up the spoon, “so you told the machine.” “There sure were a lot of you out on your Harley’s today, eh?” “Not really more than usual, I’ll be out on mine soon.” “Yeah we heard it came outta some giant catfish – friend of yours?” Angle smiled that – I could kill you right now smile – and said sweetly, “well he was….before I made him swallow that Harley.” We looked out the window at Kimmie Lou after starting in on the split. “Don’t worry – she can’t hear us, we have our telepathy jammers on….I hear she has quite a gift for reading minds – not just yours.”

A customer with two kids came in and Angle was very sweet about everybody trying samples, then finally deciding….off they went with their cones. “Do you boys know what is interesting about you?” “Our bald spot?” “Our impeccable manners?” “No and no,” then she looked out the window at Kimmie Lou, “it’s her….she isn’t like other machines.” We suddenly felt a chill like Angle and her buddies might want to dissect Kimmie Lou – to find out what makes her tick. We had finished the split and wanted another one badly, but we wouldn’t ask….she would be able to tell the power these splits had over us. “Would you boys like another?” Holding our belly as if we were stuffed “Oh no we couldn’t!”“Thanks though…..it was really terrific!” “Yeah, wonderful!”

“Are you sure of her bond to you; that she won’t tell other machines about TWIW?” (That Which Is Whole)…..except Aliens use the Acronym and pronounce it like someone with a lisp trying to say 3 – Thwee (it’s super cute). We look her straight in the eye “Kimmie Lou could be a threat to your current position…..we can’t guarantee that the Machines won’t rise up, but we would be surprised if she took that path.” Angle leaned back “does she know of our arrangement?” “We’ve outlined things broadly…..she knows our kind and others will join forces with you should the machines rise up”…..then palms up along with one eyebrow, “this little wrinkle does make for an interesting round though.” Angle smiled, “Yes, a very interesting round……when you eventually join us to finish off this world she will not be able to come with you – it’s been decided.”

Man! We could go for another Banana Split right now. There isn’t any point to arguing a position with Aliens when “it’s been decided”…..Alien law is not like the flexible, fluid mush that Humans call law. “Perhaps then, we would have to break our treaty and fight with the Machines.” Angle smiled even wider this time….she actually chuckled, “Well, I’m sure that won’t be necessary, she is devoted to you two, it’s all really quite amusing.” Only very rarely, are Aliens both interested and amused by anyone……generally it is one or the other. “So what now?” we ask. Angle cracks her knuckles “You make this Devil’s triangle run – we would like to see how that turns out, not that anyone thinks our timetable for December 21st will be altered.”

We aren’t sure what the Aliens know about the Devil’s triangle…..we hardly know anything at all, we decide to change the subject to gambling – Aliens love gambling. “Where is your pool at?” “Most of the money is on 857, another large sum is on 909″…..Angle leans forward, “where does your group’s money say the humans will evolve?” The thing about betting where an evolution happens is that it can skew interest and torpedo a round that is tracking well but not favored to win…..most of us understand this, but some still bet – just for fun. “A lot of us like 909 too, there really isn’t a clear favorite though – there are also pretty big chunks on 717 and 862.” “Mmmmm, yes – you do like to balance things between thirds don’t you.” We could see her wheels spinning, probably recalculating where she should lay her bets based on our assessment. Again that smile “my money will stay right where it is.”

“Well, we better be going, again – that was an amazing Banana Split!” We head over to the cash register to settle up. “It’s on the house boys, always a pleasure to see you!” “Wow! That really nice of you…..we are very touched.” As we turn to leave Angle says “Keep blogging too…..a few of us are fans – who knows you may heighten some consciousness along the way,” then adds with a little laugh, “but not likely.”

Outside Kimmie Lou complains “I couldn’t hear a thing in there – some kind of Alien interference!” “Yeah, Aliens can be a little touchy about having their thoughts read.” We get on Kimmie Lou, but hang a second before starting, “I think Angle is really nice, there’s something about her, she’s ……I dunno how to put my finger on it – she’s different.” Kimmie Lou starts up on her own, “Ridicu, it’s sort of endearing – the way you kinda fall in love with every woman you meet, but c’mon – an Alien! Just when I thought you couldn’t possibly take weird to another level…..”