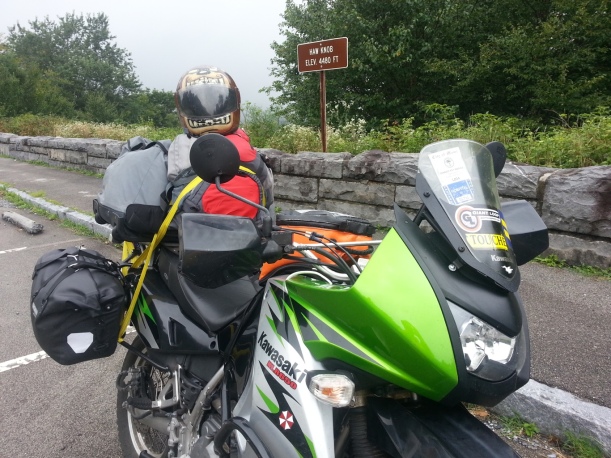 Haw Knob – just below the Mile High point on the Cherohala…..so misty on the morning we rode – the fog almost had us in the higher elevations. Just when we thought we were in the clear……yikes!

We woke earlier than usual…..doom was wrestling us out of bed. During our wake-up morning pee, “you know how running water can stimulate urination?” Yawning, “yeah.” “Well, our tinkling just made me think of 40 days of rain.” Flush…..”now that cha mention it I did notice this kinda Niagara echo wit da wiz (pretty lazy enunciation first thing). “Waddaya say we check outta the beehive a couple a days early…..ya know – hit da road before it hits us?”

Ridicu’s paranoia could be a pain in the ass at times, but this morning he was dialed in to a terrible, slimy, suffocating weasel…..just about to stuff itself down our throats, “Sure, let’s cut out today – time for a change of scenery anyway.” We had Kimmie Lou packed up in record time, she sensed our urgency, “you boys wanna tell Kimmie Lou what’s got you so spooked?” “A creep show aggressor is always sharpening knives just out of your peripheral vision…..we just got a peek at him.” Kimmie Lou wasn’t used to us strapping everything down so tightly – so roughly “is it that Albino Midget dude?” We started her up “Nah…..not Whitey, whoever it is will either be killing us by lunchtime or kicking back and taking it easy because they succeeded in moving us along.”

We had to stop in at Pop and Nana’s to say goodbye to the crew and hammer back one more Baloney, Egg and Tomato on Texas Toast Extravaganza. “Angle will be sorry she missed you, she’s not in till the afternoon shift today.” “We got her email…..we’ll send her an update and a few pics from the road.” “Alrighty then, just take it extra easy out there today – that fog is pretty thick.”

The Cherohala Skyway runs West of Robbinsville and into Tellico Plains Tennessee, it is normally very scenic as the long sweeping curves round beautiful mountains. Near the mile high point we almost got strangled by the fog – Kimmie Lou’s new Rallye Windshield kit allowed us to duck down behind it and avoid the noose. At Haw Knob we stopped for another pee and met Camilla Copperhead, when she slithered over, our pee stream snapped off like an icicle, we were about to hop back over the stone wall when she said, “relax boys, finish your business – most snakes won’t bite old, fat, balding bikers.” “Really, why not! You know Ridicu’s thing with Death right? He was basically insulted that this snake wasn’t biting us.

Somehow our flow opened back up (involuntary nerves) and we almost showered Camilla. Anyone’s guess as to whether it was me pissing myself – that Ridicu was challenging the snake to bite us or it was Ridicu egging her on by pissing at her. Whatever was going on, she didn’t flinch – just slowly moved up the grass and coiled beside our right leg ” does your urine always sound so ominous?” “Not usually, no…..it’s been a bit of a gloomy morning.” Camilla blinked slowly (weird…..we thought snakes didn’t have eyelids) “got a peek at him huh?” “Yeah, but we’re sensing he’s happy we’re moving.” “Either that or you’ll be dead by lunchtime,” said Camilla snickering.

Kimmie Lou piped up “is that a snake I hear laughing back there?” “Yep, Camilla Copperhead meet Kimmie Lou Rawls/Reed” “Howdy miss” said Camilla. Just then we heard a Harley downshifting, it was coming out of the fog behind us. The Midnight Blue FLH descended off the curve and pulled up right beside Kimmie Lou. “Thought I’d catch you up here with your pants down,” said Angle as she pulled off her Midnight Blue Helmet. We zipped our fly as Angle and Camilla started yakking away in Parseltongue (you know – snake language, right out of Harry Potter). The thing about Aliens is, they share quite a bit of their DNA with Reptiles – kinda like Apes and Humans.

“Well it was nice meeting everyone, enjoy your afternoon” said Camilla as she slithered away. “Happy Trails Camilla” yelled Kimmie Lou (which drowned out our adios). “That snake wouldn’t bite us for some reason.” Angle chuckled, “you old, fat, balding bikers taste right in between rancid beef jerky and chain lube…..We only eat guys like you whenever we lose a bet, otherwise it’s better to vaporize you. “YOU’RE NOT HURTING RIDICURYDER” growled Kimmie Lou. “Easy there sister,”Angle patted Kimmie Lou’s tank a few times, “I’m not here to hurt anybody.”

We climbed aboard Kimmie Lou and she settled down some. Our leg was almost touching Angle’s – she had parked that close “How do you like my Harley?” “Looks pretty spiffy…..hey what is it about you – you’re different from other Aliens?” Angle’s demeanor softened “I’m half Human.” That beaming smile again, her voice was gentler…..smoother. “I’m half Human too!” declared Kimmie Lou. Angle’s laugh was melodious, she laid her hand on Kimmie Lou’s tank. We sat stunned for a stretch…..a Half Human Alien? “So you’re Spock?” Angle laughed some more “except my name is easily pronounceable.”

She started up her Harley, “you never asked me which world I was betting on.” We could barely hear over the Harley’s warble…..and there it was again, almost undetectable – that thrum. “909?” We guessed. “Nope, this one right here – 702.” Then she reached out and patted our shoulder, her hand drifted down to caress Kimmie Lou’s tank, “See ya!” We waved and Kimmie Lou came up on her forks as Angle roared off the pullout and back towards Robbinsville. We looked down at the trip odometer – 10 7/8.

About five miles before Tellico Plains we hang a left towards Bald River Falls, it is a gorgeous ride South for around 6 miles snaking along the Tellico River. 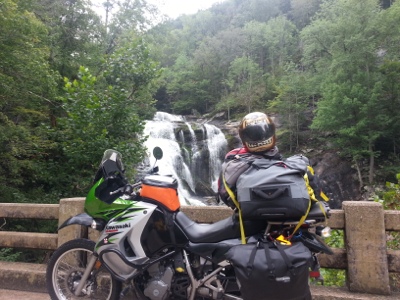 Kimmie Lou, ” Tennessee sure is pretty, but the Devils triangle makes sort of a squiggle through this state.”

“Are Aliens Indivisibles too?” asks Kimmie Lou. “Yeah, everyone is an indivisible….remember.”

I Am, Like EVERYONE, An Individual Indivisible Presentation Of That Which Is Whole.