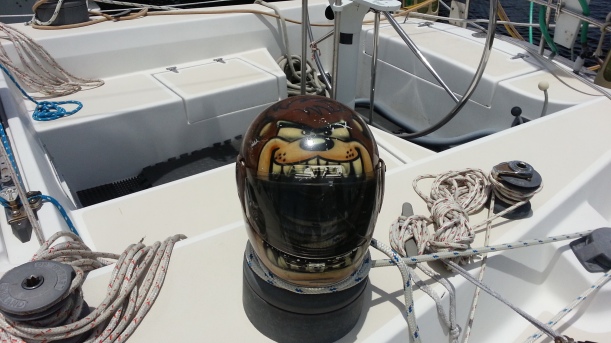 My Kawasaki KLR 650 sometimes gets a little jealous of my sailboat, so I promised to ride her around the Smokies this summer….we both need a break from Miami. I got Kimmie Lou off a Broward car lot a few years ago, she was a repo, only had 3,200 miles and told me her Asian Mama was a back-up singer for a big artist named Lou…..who “had a dark side”. We got to talking for a while and eventually narrowed her paternity down to Lou Reed or Lou Rawls. Now I know that KLR probably stands for something like “Kawasaki Long Range” or whatever,(seriously I don’t want to know what every one else thinks) to me she’s just Kimmie Lou Rawls/Reed.

Kimmie Lou was sporty from the start, I threw a leg over her and she sassed up her Japanese accent and said “nice nuts round-eye, wanna take me for a spin?” The car salesman had been watching me for awhile and brought out her key once I took a seat, he said “looks like you two have got aquatinted.” I got a little self conscious thinking maybe they saw me chatting away and laughing to myself (sometimes my lips do start moving, even when I’m having secret conversations). The ride was only a few blocks, when I turned back for the car lot Kimmie Lou said “who’s your friend?” “Later” I said. The salesman knew I was leaving with the bike when he brought me the key, he was a good sport about pretending I was in some position to negotiate. “They will take less” Kimmie Lou kept protesting as we went through the motions of haggling. When we started the paperwork she said “ooh big spenda, how bout get Kimmie Lou synthetic oil change?”

Fort Lauderdale is 20 miles North of where I live and it took me half the distance back to explain “my friend” to Kimmie Lou. “Ha ha ha ha – you mean I am a nice Dual Purpose Bike for nice fella with Dual Personalities?” “Something like that, yes” I said. “Yippi” she said “I get two guys to ride around with, I know what regular name is for paperwork……what you call each other?” Well, I”m Ryder” I said …..“and I’m Ridicu, nice to meet you Kimmie Lou”.. “Tee he he” laughed Kimmie Lou “you da funny one – kinda mischievous too right?” “At times” Ridicu tightened our thighs, wiggled into the saddle and swayed back and forth a handful of times in our lane for around a 1/4 mile. We all laughed till we got bored and straightened back out.

Ridicu doesn’t fit the split personality criteria quite like you would expect……he says we’re partially fused so we can easily talk to each other (most of the time). There are things each of us do without the other knowing (I have been married for about 20 years and Ridicu only caught on at the millennium). We don’t really hide things from each other, we just sometimes allow the other to figure stuff out at their own pace. When we directly ask a question, the answer is plainly given, it’s one of our rules. We don’t get into anything outrageous when the other isn’t looking, mostly it is just playful stuff we laugh about later.

HW – Honorable Wife or Horrible Woman as Ridicu likes to tease, knows we are going to blog about our trip, she just doesn’t want to be mentioned, so there will be little else said in the marital department.

To keep Ridicu happy we put his name first in the blog, if it were up to me we would be RyderRidicu since I do most of the logistical and higher functioning stuff. Ridicu pitches in – he just goofs around too much to be all that productive – mostly he makes up for things with entertainment value. For example : he has this thing where I am always stuck with 17 7/8 “Angles of Ridicu”, he calls them, I never know exactly what they are because he swaps out at least a couple every night while I am sleeping. Every morning I wake up and know he has rearranged the furniture somewhat, often I can’t quite put my finger on it until I trip over something. One of our most consistent Angles of Ridicu is we have been aloft on 2 wheels for almost 40 years and most of it has been in shorts, tee shirts and sandals. Now I know that may just seem stupid or irresponsible to most of you out there, but you really have to couple it with another Angle……16 of our past 20 years as a RN have been in the Emergency Room.