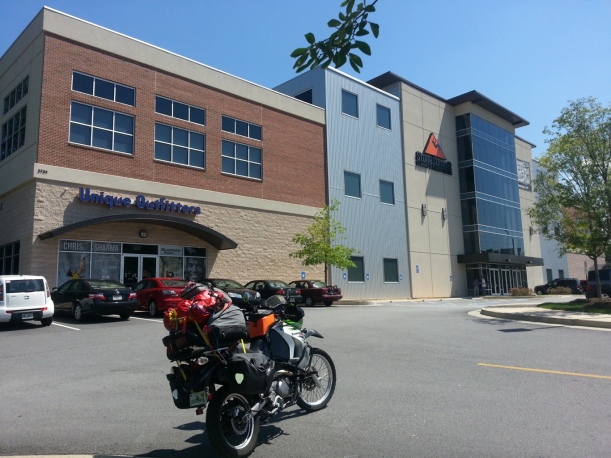 Outside Stone Summit – the world’s largest indoor climbing facility, Unique Outfitters adjacent. Kimmie Lou says ” why would anyone want to climb mountains or rocks without a Dual Sport Motorcycle?…I just don’t understand it.”

Continuing North out of Locust Grove, Ridicu starts back up, ” Pelican Felons, Mind Bending Ice Cream, Spanish Moss Remembrance Charms and now Telepathic Cheerleaders !” Kimmie Lou scoffs, “c’mon Ridicu, everyone knows that Cheerleading requires basic telepathy as a minimum…..don’t you boys get together with a few buddies and throw me 17 7/8 feet in the air without everyone dialing in their Vulcan Mind Meld first!” Whew! Kimmie Lou really can off road reason! Ridicu takes a beat “now that you mention it, I have always wondered how they juggle each other like that.”“It does make sense doesn’t it….I mean, no telepathy – that’s just crazy!”

Nobody says anything for around another 20 miles or so, the outskirts of Atlanta seem like any other North American city…..except for this weird buzzing that is getting louder as we approach. Dropping low behind the windshield we tilt to listen, “it’s not me” says Kimmie Lou. Straightening back up and putting our feet up on the highway pegs “what is that?” We begin scanning the sky for aircraft, the roads bordering the freeway for equipment, I even run a hand over our visor to make sure something like a candy wrapper isn’t wedged in….flapping steadily in the 70 mile an hour breeze we are generating.

As our left hand settles back onto the handle bar “oh, that’s what it is.” Looking in our mirrors – we see two semis barreling down on us, we are in a middle lane and the trucks are coming up fast on each side of us. The right Freightliner is black and it’s twin on the left is white, as we roll around a curve we can see the black tractor has a white trailer and the white’s trailer is black. “Awe Crap!” Kimmie Lou can’t look out her own mirrors and says “what is it?” “It’s doom….nothing to worry about, this will all be over in a couple a secs.”

We have straightened back out as the big rigs thunder by – the buzzing is so loud now it is all we can do not to vomit in our Tasmanian Devil’s helmet. Kimmie Lou shudders like a Jewish Vegan at a Pig Roast…we are buffeting so wildly that the rear wheel comes off the ground and it’s for a few seconds because we actually have to roll the throttle back to keep from redlining. When the diesel fumed turbulence is worst our rectal pressure spikes up to about 17 7/8 PSI and this is what saves us…..that involuntary knees together – pelvic thrust that happens when one is about to shit one’s self.

The bags, all strapped down, but bouncing like tufts of cotton candy in a hurricane are suddenly stabilized when our shoulders arch back in to them. Our knees clamp onto Mr Fandango which is our only attachment to the front of Kimmie Lou because our feet flew off the pegs and the bars wrenched out of our hands at the height of the death wobble. When Kimmie Lou’s rear tire touches the pavement everything shifts….our hands settle effortlessly onto the bars as our sandals come squarely and comfortably onto the pegs. That everything in slow motion for the final few seconds of your life has resumed its freeway pace and the sound has been turned back on.

Except,…something’s not quite the same.

The sky has lost its haze, a different smell is in the air – right in between Caramel and Hay baled high to the rafters in an old barn that leans, ever so slightly forward. As this smell triggers the memory our hearing begins registering….the thrum…. just like Mirror Lake! Then it hits us ——

SPLATLANTA…..WE’RE BACK IN SPLATLANTA ! Way back to the future in the cosmos around the corner where we once hung out, every so often we would hang in Splatlanta ! Kimmie Lou says “so this is Splatlanta?” Hang On! “Did those Cheerleaders pass along some ESP to you….we didn’t actually say anything about Splatlanta.” “Hey Kimmie Lou, you know Ryder and I don’t invade each others thoughts, that’s just not cool.” Maybe it’s the near death experience or us ganging up on her, but Kimmie Lou chokes back a sob before saying “I know you two were thinking of cheating on me with that Sea Doo last summer! Don’t even get me started on the Sailboat – that witch – and now I find out YOU ARE FROM ANOTHER COSMOS !….it’s like I don’t even know you anymore.”

We let a few exits go by and then “look Kimmie Lou, the Sea Doo was just going to be a buzz around the bay, riding those chicks gets pretty boring after a while. As far as the other cosmos, well it really isn’t possible to be “from” another cosmos, you can exist in two or more, but once a being gains awareness of multiple planes of existence, then you are pretty much “from” everywhere.” Another couple of off ramps go by (we can tell by the tone in her exhaust that Kimmie Lou is digesting this). “And as far as the Sailboat goes” ” YEAH I KNOW – YOU LIVE ON HER !

Eventually we exit for Unique Outfitters – a shop that still carries the 2002 Gear of the Year award winning Optimus Nova multi-fuel stoves (since discontinued as they were just too good…don’t you hate that). As we park, Kimmie Lou says “what’s this Stone Summit place?” The sign at the parking lot entrance said this was the largest indoor climbing gym in existence and that they would be soon holding the World Championships for indoor rock climbing – we all saw it plain as day. “It’s an indoor climbing gym.” “Sounds retarded…and this new camp stove – I suppose it will be using gasoline out of my tank?” We have been talking about getting our hands on one of these for weeks – she knows this, “only if it’s alright with you Kimmie Lou.” A pause while her Muffler ticks twice as it cools down, “I guess it will be fine, but you Morons will have to stop relying on my trip odometer to tell you when I am thirsty….if I’m going to nurse Wittle Baby Opti you just can’t be running me down to reserve !” “Absolutely Kimmie Lou….we’ll make much more regular fuel stops.” Another tick “I want to hear it from him!” ” Okay, okay we won’t go much beyond 100 miles before refueling – you’ll get topped off when you’re still basically half full, we will only go onto reserve when we’re in town.”

“What shall we call him?” We both say “Baby Opti sounds great!” (like we were going to suggest anything else).